No Place for Self-Pity, No Room for Fear
In times of dread, artists must never choose to remain silent.

This article was part of The Nation magazine’s 150th Anniversary Special Issue.

Christmas, the day after, in 2004, following the presidential re-election of George W. Bush.

I am staring out of the window in an extremely dark mood, feeling helpless. Then a friend, a fellow artist, calls to wish me happy holidays. He asks, “How are you?” And instead of “Oh, fine–and you?”, I blurt out the truth: “Not well. Not only am I depressed, I can’t seem to work, to write; it’s as though I am paralyzed, unable to write anything more in the novel I’ve begun. I’ve never felt this way before, but the election….”

I am about to explain with further detail when he interrupts, shouting: “No! No, no, no! This is precisely the time when artists go to work–not when everything is fine, but in times of dread. That’s our job!”

I felt foolish the rest of the morning, especially when I recalled the artists who had done their work in gulags, prison cells, hospital beds; who did their work while hounded, exiled, reviled, pilloried. And those who were executed.The list–which covers centuries, not just the last one–is long. A short sample will include Paul Robeson, Primo Levi, Ai Weiwei, Oscar Wilde, Pablo Picasso, Dashiell Hammett, Wole Soyinka, Fyodor Dostoyevsky, Alexander Solzhenitsyn, Lillian Hellman, Salman Rushdie, Herta Müller, Walter Benjamin. An exhaustive list would run into the hundreds.

Dictators and tyrants routinely begin their reigns and sustain their power with the deliberate and calculated destruction of art: the censorship and book-burning of unpoliced prose, the harassment and detention of painters, journalists, poets, playwrights, novelists, essayists. This is the first step of a despot whose instinctive acts of malevolence are not simply mindless or evil; they are also perceptive. Such despots know very well that their strategy of repression will allow the real tools of oppressive power to flourish. Their plan is simple:

2. Limit or erase the imagination that art provides, as well as the critical thinking of scholars and journalists.

3. Distract with toys, dreams of loot, and themes of superior religion or defiant national pride that enshrine past hurts and humiliations.

The solutions gravitate toward military intervention and/or internment–killing or jailing. Any gesture other than those two in this debased political climate is understood to be a sign of weakness. One wonders why the label “weak” has become the ultimate and unforgivable sin. Is it because we have become a nation so frightened of others, itself and its citizens that it does not recognize true weakness: the cowardice in the insistence on guns everywhere, war anywhere?

I know the world is bruised and bleeding, and though it is important not to ignore its pain, it is also critical to refuse to succumb to its malevolence. Like failure, chaos contains information that can lead to knowledge–even wisdom. Like art. 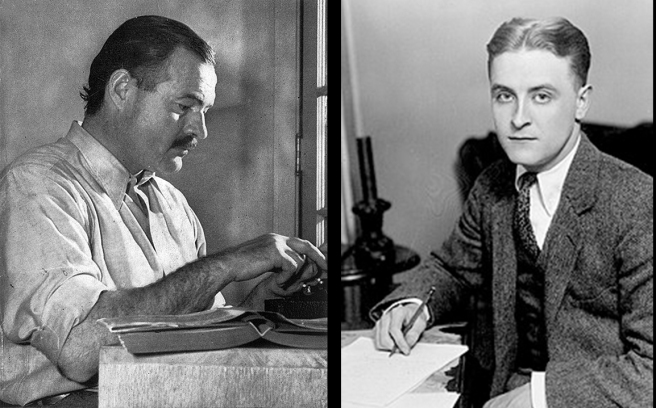 We are like lousy damned acrobats but we make some mighty fine jumps, Bo, and they have all these other acrobats that won’t jump.

For Christ sake write and don’t worry about what the boys will say nor whether it will be a masterpiece nor what. I write one page of masterpiece to ninety one pages of shit. I try to put the shit in the wastebasket. You feel you have to publish crap to make money to live and let live.

Forget your personal tragedy. We are all bitched from the start and you especially have to hurt like hell before you can write seriously. But when you get the damned hurt use it — don’t cheat with it. Be as faithful to it as a scientist — but don’t think anything is of any importance because it happens to you or anyone belonging to you… You see, Bo, you’re not a tragic character. Neither am I. All we are is writers and what we should do is write.

One of the greatest modern thinkers regarding the creative process.

History is written by the victors (Yes. That was Walter Benjamin).

The important thing for the remembering author is not what he experienced, but the weaving of his memory, the Penelope work of recollection. Or should one call it, rather, the Penelope work of forgetting? … And is not his work of spontaneous recollection, in which remembrance is the woof and forgetting the warp, a counterpart to Penelope’s work rather than its likeness? For here the day unravels what the night has woven. When we awake each morning, we hold in our hands, usually weakly and loosely, but a few fringes of the tapestry of a lived life, as loomed for us by forgetting. However, with our purposeful activity and, even more, our purposive remembering each day unravels the web and the ornaments of forgetting.These are days when no one should rely unduly on his “competence.” Strength lies in improvisation. All the decisive blows are struck left-handed.

The work of memory collapses time.

Memory is not an instrument for surveying the past but its theater. It is the medium of past experience, just as the earth is the medium in which dead cities lie buried. He who seeks to approach his own buried past must conduct himself like a man digging.

Boredom is the dream bird that hatches the egg of experience. A rustling in the leaves drives him away.

All human knowledge takes the form of interpretation.

The only way of knowing a person is to love them without hope.

It is only for the sake of those without hope that hope is given to us.

Counsel woven into the fabric of real life is wisdom.

The art of storytelling is reaching its end because the epic side of truth, wisdom, is dying out.

There is no document of civilization that is not at the same time a document of barbarism.

Every morning brings us news of the globe, and yet we are poor in noteworthy stories. This is because no event comes to us without being already shot through with explanation. In other words, by now almost nothing that happens benefits storytelling; almost everything benefits information. Actually, it is half the art of storytelling to keep a story free from explanation as one reproduces it. . . . The most extraordinary things, marvelous things, are related with the greatest accuracy, but the psychological connection of the event is not forced on the reader. It is left up to him to interpret things the way he understands them, and thus the narrative achieves an amplitude that information lacks.

The fairy tale, which to this day is the first tutor of children because it was once the first tutor of mankind, secretly lives on in the story. The first true storyteller is, and will continue to be, the teller of fairy tales. Whenever good counsel was at a premium, the fairy tale had it, and where the need was greatest, its aid was nearest. This need was created by myth. The fairy tale tells us of the earliest arrangements that mankind made to shake off the nightmare which myth had placed upon its chest.

Let no thought pass incognito, and keep your notebook as strictly as the authorities keep their register of aliens. 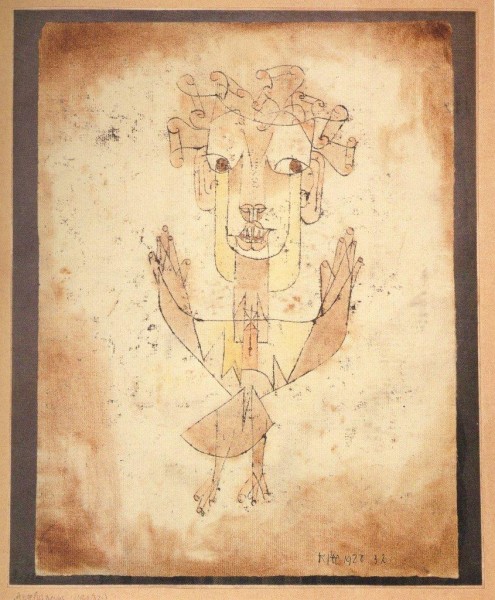 A Klee painting named ‘Angelus Novus’ shows an angel looking as though he is about to move away from something he is fixedly contemplating. His eyes are staring, his mouth is open, his wings are spread. This is how one pictures the angel of history. His face is turned toward the past. Where we perceive a chain of events, he sees one single catastrophe which keeps piling wreckage upon wreckage and hurls it in front of his feet. The angel would like to stay, awaken the dead, and make whole what has been smashed. But a storm is blowing from Paradise; it has got caught in his wings with such violence that the angel can no longer close them. This storm irresistibly propels him into the future to which his back is turned, while the pile of debris before him grows skyward. This storm is what we call progress.

Your warm-up exercise for today is to write about a time you were angry. It could also be a time of dread.
As usual, about a page is good.